A former RAF pilot shot down by the IRA in south Armagh in the 1970s has returned to Ireland to try and reconvene with the person who fired the rocket.

Mike Johnston escaped injury in the RPG and subsequent gun attack, but said the trauma of being hit by the missile in particular followed him for many years.

Speaking on the Nolan Show on BBC Radio Ulster, he said he had "the greatest respect" for the professionalism and belief of the IRA members who were so determined to claim his life.

No-one was killed in the initial attack, but Mr Johnston said there was a "minor gun battle that ensued, which lasted for 10 to 15 minutes".

The former soldier, who was piloting the helicopter at the time, said that when the rocket struck, as he landed in Crossmaglen, he initially thought it was an engine fault. 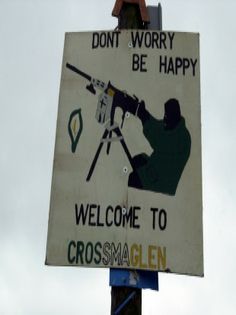 It was when the bullets started hitting the tail of the helicopter and making their way down towards the main cabin that we realised that we were under attack,

he said. Mr. Johnston continued, revealing the effects of post-traumatic stress which he still carries with him, some 40 years after the attack:

I certainly know that if someone slams a door behind me I'm probably more reactionary to it than the majority of people!

As time passed, he decided to try to find the person who launched the missile, and so he approached Northern Ireland's Deputy First Minister Martin McGuinness.

Along with my wife, I visited Stormont. We had a very interesting and long conversation with Martin McGuinness, whom I found to be very honest and sincere.

Mr Johnston says the Sinn Féin man told him he did not have "the connections" to find those involved in the attack.

However, the former RAF pilot did meet an ex-IRA man in south Armagh - a man he calls "Mr Moran".

I think my conversation with him was very honest and very understanding from both points of view,

Though he still wishes to meet with his attackers, he admits it unlikely as he would be exposing them to potential legal threat. But Mr. Johnston maintains that he wholly appreciates their reasoning for their assault on his person, and futhermore, their beliefs:

They have never been prosecuted and exposing them to that risk really would be unfair.

For the individuals that honestly believed that what they were doing was right, I have the greatest respect for them.

The problem is that if you give people guns they try to kill each other,

Or Try: 'Check That Podium For A Raw Onion' - Fox News Contributor On Tearful Obama Speech