Our good pals at Waterford Whispers News aren't exactly averse to sparking some mild public outrage, usually from idiots who don't realise WWN is a satirical website (for our brethren in the USA, Canada and Australia - think The Onion, but very Irish).

Last year, Ugandan and German news sources weren't the only ones fooled by the Waterford lads' epigrammatic faux-articles, and yesterday marked the turn of our noisy neighbours from across the Irish Sea.

I use 'noisy' only half-seriously, of course, but in recent months there has been a fecking epidemic of accidental claims from British media sources that some of Ireland's most famous daughters and sons are, in fact, 'theirs' and not Irish - with Saoirse Ronan in particular being lauded as a 'British actress' on numerous occasions in the lead-up to Oscar season.

Enter Waterford Whispers News, who decided to turn the tables for a change... 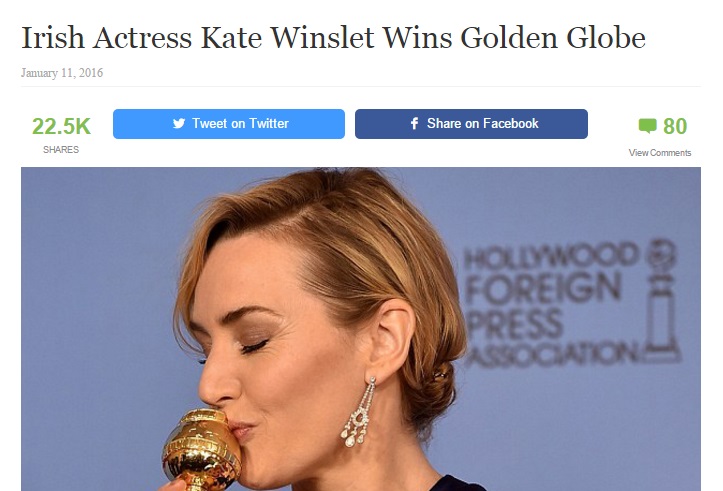 IRISH actress Kate Winslet appeared to be completely in shock last night when she won a Best Supporting Actress Golden Globe for her role in the Steve Jobs biopic,

The Irish-born celebrity described co-star and fellow Irishman Michael Fassbender as “a legend” and “an amazing colleague and friend.

Winslet beat out the likes of Helen Mirren to the Globe - her fourth in total - during the 74th Golden Globes ceremony at the Beverly Hilton on Sunday night.

WWN decided to 'quote' the Reading native to twist the knife into unaware British passers-by:

“I’m not just saying that because I’m Irish,” 40-year-old Winslet told WWN. “It was an absolute honour to work with Michael on this movie as we had crossed paths numerous times before in our younger days working in Ireland. I’m delighted to be bringing this award home to Ballyreading. Come on you boys in green!”

It's fair to say that British commenters not familiar with the ways of WWN didn't take their 'revenge for Saoirse' particularly well...

Turns out two can play at that game, Britain!

WWN concluded the article with a throwback to Sky News presenter Richard Suchet's good-willed but slightly misguided efforts to call Ronan 'one of their own' prior to the Globes.

In other categories, British actress Saoirse Ronan failed to grab the Best Actress award after being nominated in the  category for her role in Brooklyn.

Major hat-tip to the lads at Waterford Whispers News.