Eddie Downey was barely half a year into his IFA presidency when a flight from Amsterdam to Kuala Lumpur was shot down over eastern Ukraine in July 2014.

Malaysia Airlines Flight 17 was hit by a missile and crashed in the Ukrainian separatist region of Donbass. Reports from investigators, and from American and German sources all pointed the finger at pro-Russian. However Putin blamed the pro-European Ukrainian government and Russian media even went so far as to suggest that it was a failed plot to assassinate their president.

So how does the IFA come into all this?

In the year and a half previous to the plane being shot down the farming sector in Ireland was thriving. In particular the dairy industry was enjoying a surge in prices that it had not experienced in years. Minister for Agriculture Simon Coveney was on the radio every other day speaking about the great export growth in agricultural produce and of how the abolition of milk quotas in early 2015 would lead to even 'boomier' times for dairy farmers in Ireland.

However, Russia was, at the time, a big importer of this Irish produce. In 2013 they had imported €213m worth of agri-food goods from Ireland. By May 2014, despite the escalation of the crisis in Ukraine and a Russian ban on EU pigmeat imports, the diary industry in Ireland was seeing little negative impact.

Despite political uncertainty, Russian demand is holding its own for butter and cheese. Recent analysis by Irish/Russian economist Constantin Gurdjiev has indicated that there has been little or no negative impact on the food trade between Ireland and Russia from the Ukrainian/Russian crisis.

However, barely two months later everything would change dramatically.

In the wake of the Malaysian airliner being shot down, the EU, the US and other countries such as Norway and Switzerland imposed more economic sanctions on Russia. This was not the first round of sanctions imposed on Russia - in fact it was the third - but up until then Putin had resisted the urge to respond in kind.

However, on 6 August he signed a decree which placed a one-year embargo on certain products from the EU, Norway, Canada and Australia. These products included almost all agri-food goods exported from Ireland to Russia.

At first the Russian ban was not seen as something which would have a huge negative impact on the Irish farming sector. However as the months unfolded, the dairy industry in particular started to feel the pinch.

In 2014 the value of Irish agri-food exports to Russia amounted to €145m. For the first four months of this year it totaled €15m; an 80% decrease on the same period last year.

The average price a farmer in Ireland got for his milk peaked at around 43 cent per litre in 2013. In September of this year the average price was 24-26 cent per litre. When you consider that the cost of production is 25c a litre then this leaves many Irish farmers actually losing money on the milk they sell.

While the Russian ban is not the sole reason behind this it has had a huge impact, with estimates placing the ban as responsible for as much as 75% of the drop in milk prices.

The embargo was having a big impact on every farming sector in Ireland, not just dairy, but earlier this year there had been hope that Russia would have to cave in and allow agri-food imports from the EU even before the one year ban was up. However it was not the case. In fact, Putin decided to extend the ban for another year until August 2016.

The farming sector in Ireland was looking bleak and it was about to get much worse. 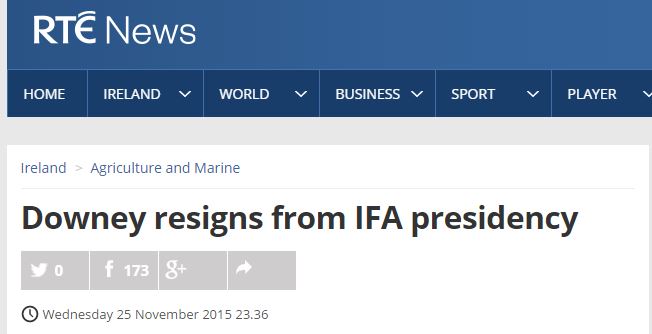 While the current scandal engulfing the IFA may have come about regardless of the economic state of farming it is strange to think that there were no alarm bells rang when their General Secretary Pat Smith was earning a package worth €535,000 in 2013 or when - as it emerged last week - his predecessor was earning even more.

The pay debacle may have been an inevitable one but one which Eddie Downey could have revealed on his own terms - via the findings of the IFA's audit and remuneration committee - and perhaps saved his own job had he been given more time. But instead it was leaked and the fallout has been disastrous.

Why was it leaked now? As the actual whistleblower himself, Derek Deane pointed out on Prime Time 'If all is well in the garden people are not inclined to rock the boat.'

Would Eddie Downey still be IFA President if that airplane hadn't been shot down over Ukraine? It is impossible to say but it certainly played a role in his downfall.