A mother is the truest friend we have, when trials heavy and sudden fall upon us; when adversity takes the place of prosperity; when friends desert us; when trouble thickens around us, still will she cling to us, and endeavor by her kind precepts and counsels to dissipate the clouds of darkness, and cause peace to return to our hearts.

Far be it for me to second guess the literary craftsmanship of such a renowned American author and diplomat, but I think what Washington's really trying to say here is, "I love my mam."

The Irish Mammy is an institution; more encompassing, even, than the famed cup of 'cha', more important than The Late Late Show or other such cultural trivialities (in relative terms, of course).

But in a godless age where few of us give a baker's about the Eurovision Song Contest or how the local priest is fixed for teabags, the Irish mother retains her position atop the loftiest of social perches. Untouched by the Kardashians. Unmoved by inexplicably Instagramming meals.

Delayed flight !! Mammy is gonna be unhappy 😬😅 going to have to leg it out to her when we get back 🏃🏼

Indeed, there now exists statistics to back up such bold claims. A study done on behalf of belVita has revealed new insight into the relationships Irish people have with their 'mammies', with the results showing exactly the influence our mothers have on life in Ireland.

For starters, almost half (47%) of all Irish people speak to their mothers at least 4-5 days per week. Additionally, almost a quarter (24%) of those who no longer live with their mother are contacted by her at least 4-5 days a week - usually, I'd suggest, at the most outrageously inconvenient time imaginable.

‘You’d forget your head if it wasn’t screwed on’ is Irish people's favourite mammy morning expression, chosen by almost 3 in 10 adults (27%). Other popular mammyisms included, ‘It’s fierce wet rain out there,’ and ‘have you got your big coat?’

Perhaps the most amazingly Irish statistic from the survey, which was conducted by iReach Market Research, is that half (50%) of those who don’t live with their mother still go home for their Sunday lunch each week. I mean, would ye not give the poor woman a brea- what's that, Mam? A roast? Yeah, I'll be there.

Elsewhere, almost 4 in 10 (39%) believe their mammy would still do their washing if they lived with her, with a third of Irish people claiming their mammies still comment on their looks. 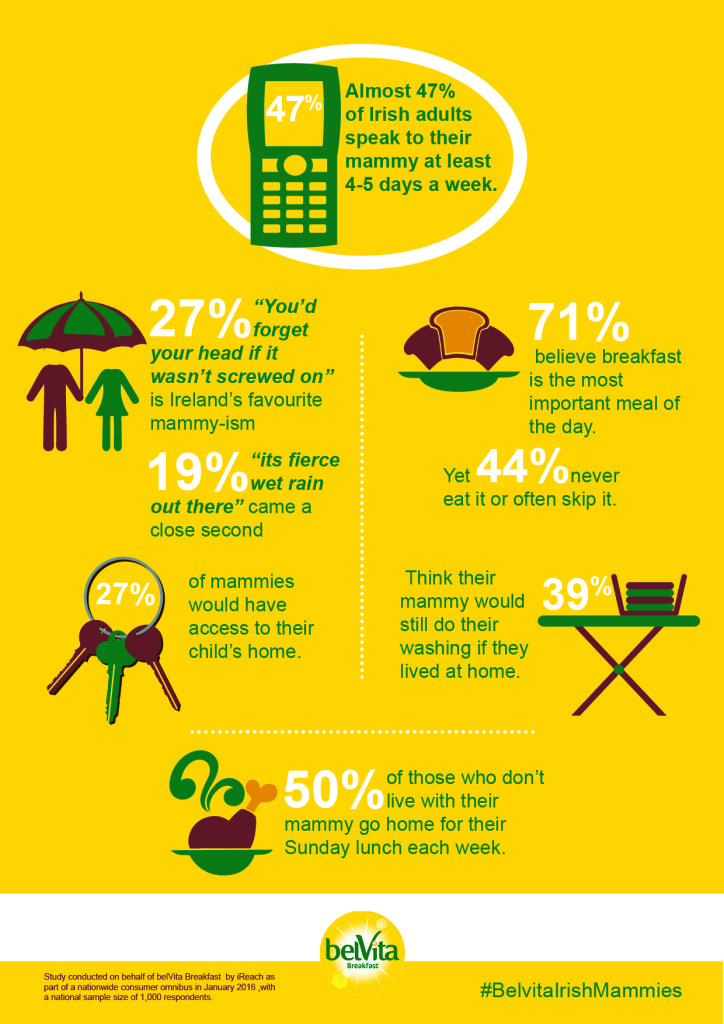 BelVita also did research into the Irish breakfast, discovering that 70% of Irish people agree with the old motherly adage which claims that breakfast is the most important meal of the day. However, 44% of those sampled admitted to never eating or often skipping breakfast - a shameful act in the eyes of mothers everywhere.

‘No appetite in the morning’ is the primary reason for skipping breakfast (53%). Not having the time is the second reason (45%) – being highest amongst working professionals (58%) - two excuses deemed simply unacceptable in most Irish households during our formative years; nothing creates an appetite and saves time quite like forcing down whole slices of toast while simultaneously sprinting out the door.

As they begin their year-long #belVitaIrishMammies campagin, the folks at belVita want you to share your favourite breakfast time motherly phrases with them on Facebook and Twitter.