A letter written by 'the father of human rights investigations in the 20th century' which dates back to 1913 has been unearthed in Cape Town, South Africa.

In the previously unpublished letter, Dublin-born Irish nationalist Roger Casement criticises British Rule in both Ireland and South Africa, and explains why he was willing to die protecting the Irish language. 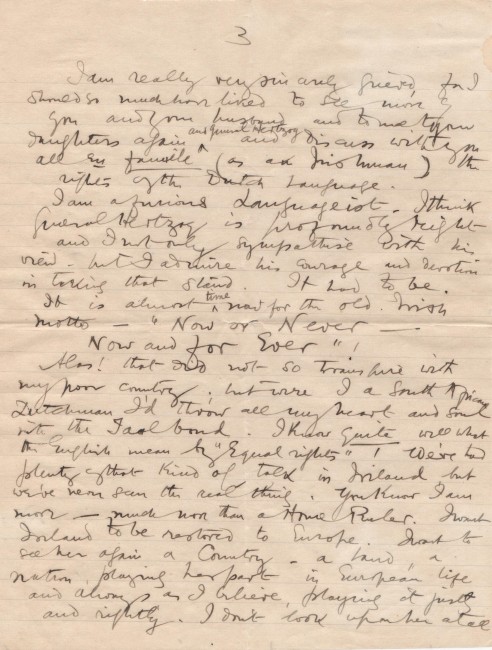 Casement warns his correspondents - which, given their surname 'de Villiers,' are presumably Boers - of what South African's Dutch-speaking contingent should expect from the British, reflecting on their disdain for the Irish language back home and laughing off their commitment to equality:

I know quite well what the English mean by ‘Equal rights’! We’ve had plenty of that kind of talk in Ireland but we’ve never seen the real thing.

Casement claims, “Irishmen were being sent to jail for writing their names in Irish” and that one of his friends, “a Student of the University, got a week’s imprisonment because he refused to sign his name ‘Eamon’ in the anglicised form ‘Edmund’! And the English think they love freedom!”

AntiquarianAuctions.com said the eight-page letter (which you can view in full on their website, here) is valued at about €4,500, and was sent by Casement to the de Villiers family in Cape Town on his return from the city in 1913. It had remained in their possession ever since.

There are a good many things I’d cheerfully go to jail for, and one is the poor old downtrodden, despised Irish language.

He added, rather prophetically,

I want Ireland to be restored to Europe. I want to see her again a country – a land, a nation, playing her part in European life and always as I believe, playing it just and rightly.

I don’t look upon her at all as a bit of English property, or as belonging to England, or as being ‘owned’ by anyone but herself and her own children.

Casement's passion for his home country is conspicuous throughout the letter, which was sent from his ship - the SS Armadale Castle - from the Portuguese island of Madeira:

I only want to be ‘an Irishman’ – to me it is the proudest title upon Earth.

The diplomat maintained that he was much more than a "Home Ruler", but predicted his inevitable downfall at the hands of British imperialism, telling Mrs. de Villiers:

I fully expect to end my days in jail.

In 1916, Roger Casement was arrested in Co Kerry after attempting to import arms from Germany. He was sent to London and found guilty of treason. He was hanged at Pentonville Jail on August 3rd 1916, aged 51.

random
7 years ago
By Conor Neville
We Could Be In For A Bit Of A Change On The Weather Front...
8