The victims were named as reporter Alison Parker and cameraman Adam Ward who both worked closely together at the station.

How Alison Parker & Adam Ward should be remembered instead of the horrific video [via New York Daily News] pic.twitter.com/KoNjJOqr7k

The shooter has been named as Vester Flanigan, who, according to reports went on to shoot himself following a police pursuit. He is said to be in critical condition in hospital.

This is the suspected shooter, Vester Flanigan, who is also known as Bryce Williams. He is a former WDBJ7 employee. pic.twitter.com/ngXrqHVLmw

Both Parker and Ward were in relationships with other employees of the station and devastatingly, Mr. Ward's fiancée was apparently in the control room and saw him being shot.

After the tragedy, Ms. Parker's boyfriend took to his social media pages to share some touching memories and inspirational words about his girlfriend. 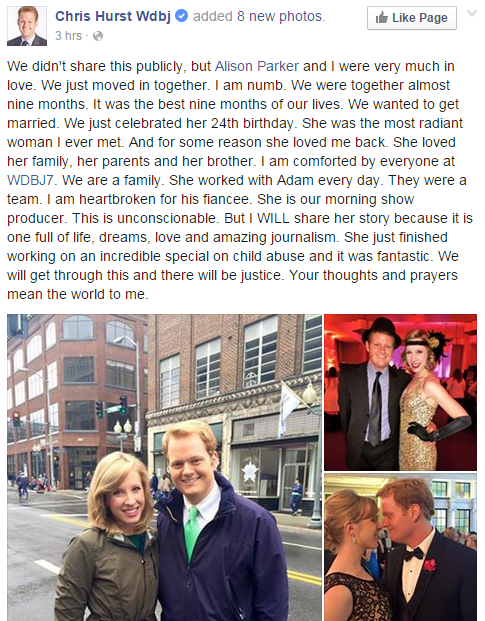 I’m not sure whether I want him to live or die. We’re hurt enough that we want to express our anger, and our love for Alison and Adam.

RIP Alison Parker and Adam Ward. Our thoughts are with their family and friends.