With the death of famed actor Alan Rickman compounding the misery of a shitty 2016 to date, thoughts and tributes have been pouring in throughout the worlds of film and social media today.

As you well know, Rickman portrayed Severus Snape in the Harry Potter film series. The 69-year-old famously withheld his story arc from everybody - including the film directors and producers - having been told back in 1998 by J.K. Rowling that his character was in fact not aligned with Voldemort, but a secret agent for Dumbledore.

It was quite amusing, too, because there were times when a director would tell Alan what to do in a scene and he would say something like, 'No I can't do that - I know what is going to happen and you don’t,

He had a real understanding of the character and now looking back, you can see there was always more going on there - a look, an expression, a sentiment - that hint at what is to come... the shadow that he casts in these films is a huge one and the emotion he conveys is immeasurable.

In fact, in an interview with RTÉ a couple of years ago, Rickman himself hinted at a “little piece of information, which I always said I would never share with anybody and never have, and never will.”

Rickman and his character, Snape, have always had a special place in the hearts of Potterheads since the revelations in the Half-Blood Prince, and it's clear that the actor had the same effect on Potter peers Emma Watson and Daniel Radcliffe during their decade of filming together:

I'm very sad to hear about Alan today. I feel so lucky to have worked and spent time with such a special man and actor. I'll really miss our conversations. RIP Alan. We love you 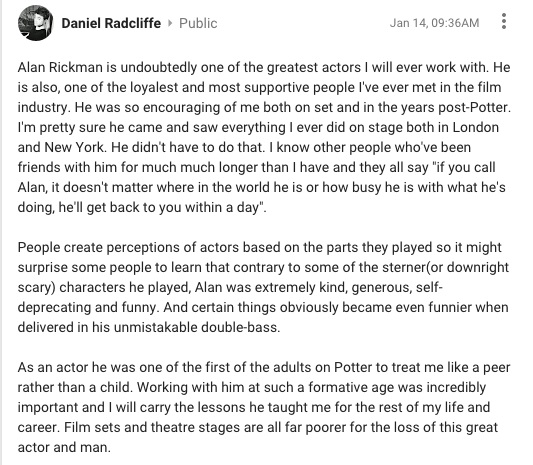