Selena Gomez has evoked pandemonium among people who have little else to be at after she post a photo to Facebook and Instagram of herself and a gang of Niall Horan's friends, with the caption 'I have a serious thing for Mullingar guys.'

The photo has been liked over 290,000 times and as I browsed through the comments under I quickly realised just how truly strange this world is.

I have a serious thing for mullingar guys... @nickyc9

It didn't take long before some people in the comments section sussed that she might be making an oblique reference to Niall Horan ... Queue a mix of excitement and jealousy.

NIALL'S IS A MULLINGAR GUYS!

Some were not happy with the situation, while others thought it was a promo of some sort. A promo for Mullingar??

Some, in desperate need for a response, decided to have conversations with themselves

In pretty much all of the 2,000 comments, punctuation was not a necessity. 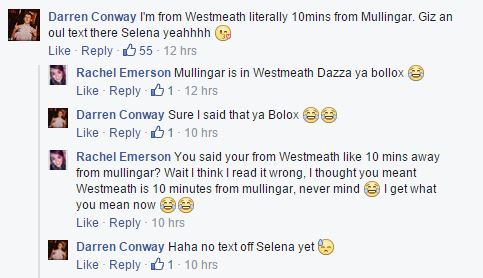 This lad had no clue what was going on.

While another lad thought she was asking him a question.

Every now and again you get a comment from an Irish person that actually makes sense.

Sometimes you get the sense that the public opinion of Ms Gomez is split.

There were no shortage of incoherent demands from fans either.

While some just wanted a bit of a catch-up.

You might think asking her to come see your bedroom was the most ridiculous comment left under it but no, Barbara takes home that award.

We'll leave the last word with Wit A Geoffrey. Another confused fan whose reaction to the photo was in no way over dramatic.