After a more-than-decent effort from Ryan Tubridy to match Graham Norton's whimsical levels of entertainment with Ice Cube and Kevin Hart last week, the Late Late returns to form tonight with a truly appalling lineup, where Graham once more welcomes two of Hollywood's most compelling and funny stars.

Bear in mind that, due to scheduling conflict, former One Direction man Zayn Malik has had to pull out of his appearance on The Graham Norton Show tonight, and the lineup is still at least 178,000 times more appealing than that of its RTÉ counterpart. 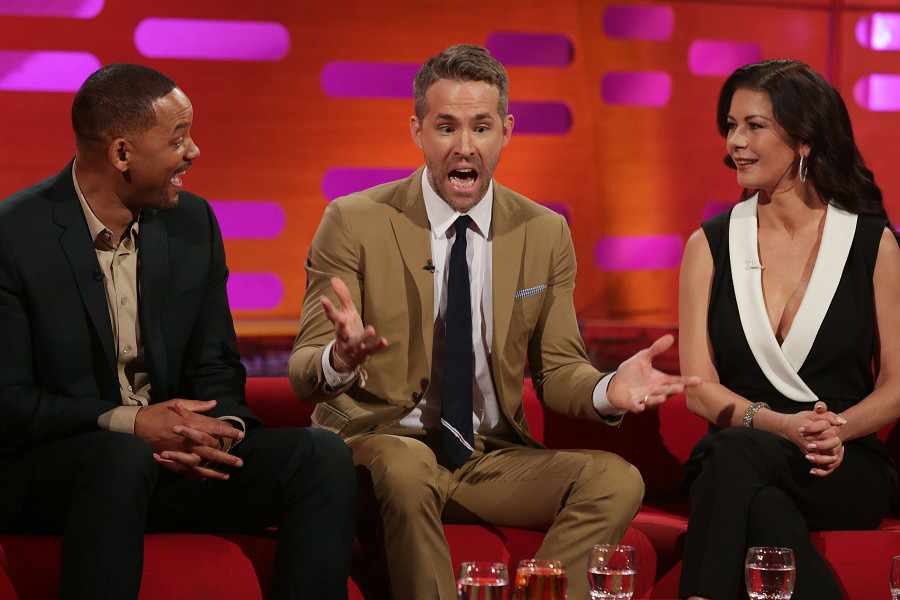 It's going to be an enthralling night for fans of Ryan Reynolds, because Ryan Reynolds joins Graham to discuss his upcoming, foul-mouthed action-comedy Deadpool - the latest entrant in the Marvel cinematic universe.

One of the few actors who no heterosexual man would be ashamed to describe as 'a beautiful bastard', Reynolds is always up for a laugh, and should amalgamate well with his fellow guests tonight. Vancouver native Reynolds, who shot most of Deadpool in his hometown, had this to say about Zayn's no-show:

Zayn isn't on the Graham Norton show with me anymore. I'll still go... But obviously I got my lips done for nothing. #DeadpoolDoesLondon

Joining the 39(WHAT)-year-old will be the legendary Will Smith - a Graham favourite - who will chat about new film Concussion, where he plays Dr. Bennet Omalu, a Nigerian forensic pathologist who fought against efforts by the NFL to suppress his research on CTE brain damage suffered by professional football players.

Smith will also doubtless be asked about his boycott of this year's Academy Awards following the frankly very relevant #OscarsSoWhite furore, which will be interesting considering his standing in Hollywood and two previous nominations.

No doubt there will be time for some fun, too, like this famous appearance:

Alongside Reynolds and Smith will sit Welsh Oscar winner Catherine Zeta-Jones, who will discuss her role in Dad's Army and a racy bet she has with husband Michael Douglas when they play golf together. Joining Zeta-Jones is fellow Dad's Army star Toby Jones.

Over on RTÉ from 9:30 or so, all signs of hope will be absent from Ryan Tubridy's eyes as he speaks with controversial GAA pundit Joe Brolly, outgoing This Morning host Eamonn Holmes who is in preparation for major surgery, and former Hear'Say band member - or current Corrie actress - Kym Marsh. Musical guests include Ralph McTell, Kerry band Walking On Cars, John Grant and the RTÉ Concert Orchestra. But we'll be flicking over to the Beeb at 10:35pm.

Culture
7 years ago
By Gavan Casey
Video: As Trailers For Trailers Go, Deadpool's Is A Hysterical Game-Changer
Previous Next