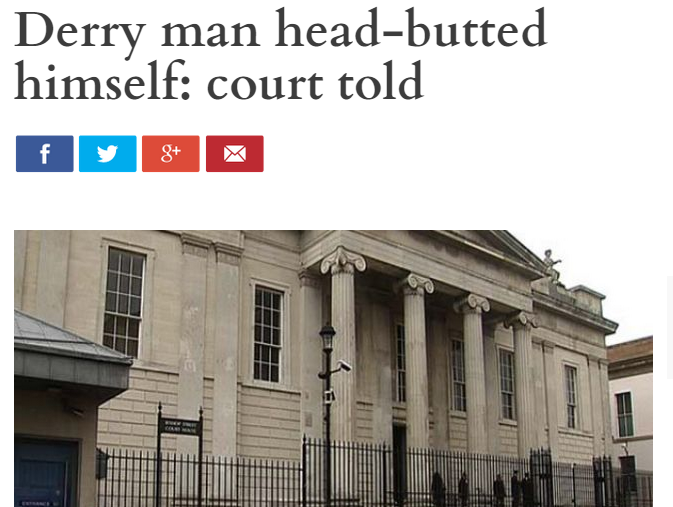 A man in Derry has been forced to pay £548.40 to a bar after smashing a window with his head.

Gerard McGaughey was also charged with criminal damage following the incident. Memory of the event escapes Mr. McGaughey but CCTV has recorded the incident in all its glory.

Derry Now flag up the nature of the offence with their marvellous headline 'Derry man head-butted himself: Court Told'.

It is an immediate head-scratcher. Head-butting oneself would be an extremely anatomically challenging thing to pull off.

Apparently McGaughey was wandering through Derry city centre when he passed a pub which boasted a glass door and was quite literally frightened by his own reflection. His first instinct was throw a head-butt at said reflection. The only effect of his reflexive reaction was to shatter the glass.

It may not surprise readers to learn that Mr. McGaughey had been drinking at the time.

The whole sorry incident is captured on CCTV. The prosecution suggest he turned around and was almost spooked by his own reflection in the door. If the prosecution theory is correct, he may be fortunate that he is not charged with attempted assault.

Bravo to the people of Derry Now for leaping to the appropriate headline.