Electionwatch: Party Leaders Put To The Wire Ahead of Election Press Moratorium

As the moratorium on press comment relating to this year’s election came into effect earlier this afternoon, the hard-hitting journalists of the nation’s commentariat made sure to get in their last grillings when they could this morning. Nowhere has this been more evident than on the not-at-all-mortifying Ireland AM, which has seen the country’s most renowned political figures tested on how well they can navigate a giant children’s party game.

As the below Vine demonstraates, today’s edition of the Steady Hand Challenge provided a much-needed excuse to witness Enda Kenny displaying the sort of painfully hollow faux-jocularity that some heartless brute on a media training course once taught him he could achieve.

As usual with any media event in which politicians are tasked with being “fun” – see also roughly 90% of Irish TV in general – the steady hand challenge wasn’t particularly entertaining. The stiff, contrived feel of the entire thing really did boast the kind of pound shop wackiness common to those people who put reindeer antlers on their cars for Christmas. Although, when all was said and done, it did supply plucky right-winger Lucinda Creighton with something of a victory in the overall leaderboard, a triumph which may well prove to be a novel and unique experience for her campaign. Kudos, Lucinda! 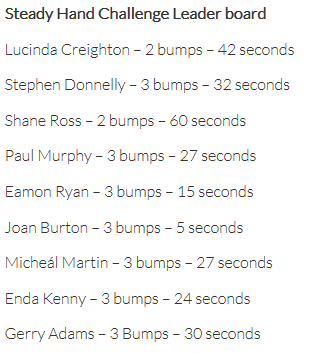