Jesus, this is extraordinary.

Most people associate Donald Trump with being arguably the least intelligent man to ever gross over four billion dollars.

The rotten bastard is now back in the headlines, finally following through with his threats to run for US president - and naturally accruing the support of thousands of garbage human beings across America.

While a Trump presidency would undoubtedly be a global disaster akin to the meteor which wiped out the dinosaurs 65 million years ago - which incidentally was the epoch during which Trump developed his political views - he is great craic, particularly if you like to laugh at backhanded racism, belligerent comments about women and withered billionaires who wear wigs.

Hey @realDonaldTrump - In case you're looking for that tweet you deleted .. I got it right here. pic.twitter.com/a6F98q5xGU

The latest twist in the presidential race comes by way of a similar natural phenomenon. His face has only gone and appeared in a woman's butter:

Unsavoury scenes by way of a kitchen apparition for American Jan Castellano, who reportedly Can't Believe It's Not Trump.

Here's a picture of his actual face, just to compare: 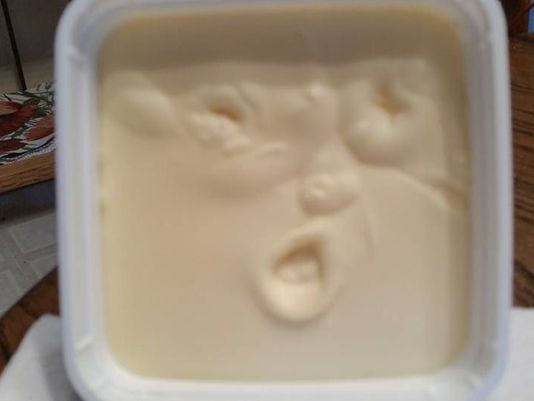