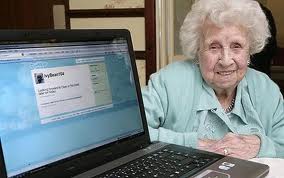 Maureen is an incredibly, incredibly old woman from Ballisodare in Co. Sligo who, after months of fear and hysteria surrounding the changeover to Saorview, has now gone on to receive her first ever fibre-optic broadbrand package.

Maureen used to babysit William Butler Yeats, and has a pet swan named Bunt. She'll join us on the Sliced Pan every week to answer your questions on romance, relationships, sex, swans, drugs, tea and pretty much anything else you can think of.

Last week, she tackled questions about toenails in butter, the immersion and how to get a red wine stain out of a cream dress. This week, the questions are a little different:

What do you do when you're riding a donkey up the hill in Santorini and the donkey in front keeps farting!! This is really happening

sent via my iPhone

Would you be anything to the Fitzgeralds in Blarney, Co. Cork I wonder? I'm sure they had an Aiveen.

Anyway, regarding your ass predicament; are you sure it's the donkey? From my own experience of Santorini, I have to say I found the Greeks a very flatulent people, astonishingly liberal with their bowels.

I suppose, if it is in fact the donkey itself who was breaking wind upon you, the only way to stop it would be to move slightly to your left, and let the person behind you take the brunt of it. Alternatively, if you felt this might become an ongoing issue, i.e. you think you might find yourself behind this particular donkey often during your stay, try feeding it some dried fruits and a small drop of warm milk to maintain the alkilinity in its wee stomach.

My boyfriend and I have a good relationship but with the upcoming Star Wars film fast approaching, there are times when he chooses to don a Darth Vader mask in bed, and he'll then refuse to respond to anything other than 'Darth Kickass.'

The weird breaths he takes during sex are very disconcerting, not to mention the light sabre/dark side metaphors. I'm not saying he uses Force - of course not, he's a good person - but I'm just sick of that weird fucking mask, and him asking "who's your father?" when we get intimate.

What should I do?

Is his name Paul by any chance? A Wookiee costume should do the trick.

Trying to settle a bet with my friend.

Well you were right the first time. It's definitely scone.

Be careful with all that gambling, Diarmuid, for the love of God. I'd tell you about my trip to Vegas to watch Conor McGregor last Saturday but my young swan Bunt is pecking at the window trying to head north for summer again. I don't honestly know what he sees in Donegal. He probably wants to hit the slot machines in Bundoran like you, ya big eejit!

If you're facing a personal crisis or are just generally curious about Maureen's swan, drop her an email at [email protected]