The Results Are In! Was Alan Rickman A Bigger Prick In Die Hard Or Love Actually?

Earlier this week we posed the question, 'Was Alan Rickman a bigger prick in Die Hard or Love Actually?' and it's fair to say people certainly weren't shying away from having an opinion on the topic.

Before the poll went live we really thought it was a 50/50 call but within minutes you could see that this was going to be a landslide. Yes, Hans Gruber may have kidnapped and murdered his fair share but it seems his deeds are nothing in comparison to that bastard Harry in Love Actually.

You may think that the fact Love Actually was on RTÉ One last night made a big difference but in fact, in the voting margins have remained steady all week. Almost eight in every ten people who voted felt that buying that necklace and breaking his wife's heart was more evil that taking the Nakatomi Plaza hostage and killing that Japanese man. 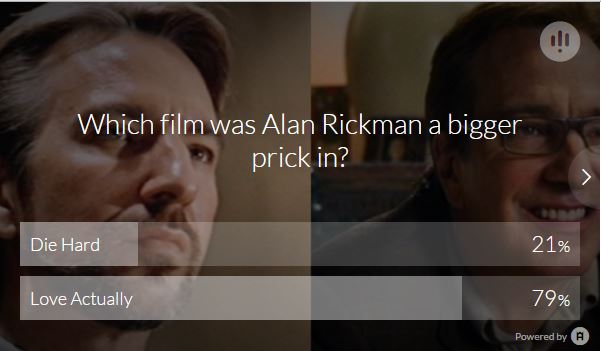 By the way, there was more than one person who simply replied to the question with 'Michael Collins.'