Another day another example of people trying to claim Irish celebrities as British. If there was ever anything to raise momentary rage in this country it's when UK media outlets do such a thing.

Today is the turn of The Critics' Circle who have made the ultimate boo boo when announcing the nominee for their film awards by labeling the likes of Saoirse Ronan, Colin Farrell and Michael Fassbender as British.

Originally the award categories were named 'Best British Actress' and 'Best British Actor', with the likes of Kate Winslet, Idris Elba and Tom Hardy also in contention but after their major discrepancy was highlighted by the likes of Donal Clarke and TheDailyEdge.ie they have subsequently changed the titles.

They are now the best British/Irish actors and actresses. 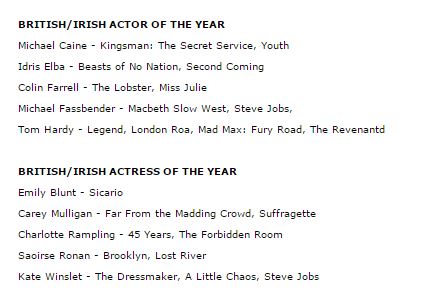 Not only that but they also had Room and Brooklyn in the 'Best British Film' category which has now been unsurprisingly changed to 'Best British/Irish Film.'

This is the first time something like this has happened to the likes of Colin Farrell. An occurrence even Samuel L Jackson can attest to.