Watch: The 7 Greatest Election Songs In The History Of The State

In a week which saw the re-emergence of Cork rapper GMC's sensational ode to Alan Kelly only for it to disappear again (at the hands of GMC, we might add), we've taken it upon ourselves to dip into the electoral archives and dig out our all-time favourite election songs.

What a truly weird little nation Ireland can be...

The Wallace is out there...

The 'Make The Diff' video is sprinkled with images of Michael Healy-Rae brandishing a shotgun, drinking Guinness, scaring the shite out of a dog and - in a bizarre twist - speaking on Tonight with Vincent Browne.

Healy-Rae's track is written and performed by local Kerry band Truly Diverse. It includes lyrics such as “he’s flat to the mat with his black cap” and “he’s amazing", very little of which can be argued with on the basis of this song.

If looks could kill. Indeed, if elections were based on a politician's ability to look apoplectically angry even while smiling, then Tipperary's Michael Lonergan would probably be Taoiseach.

Set to the backdrop of subtle harmonies and acoustic strumming, Lonergan's tune wouldn't seem out of place at the end of an episode of Greys Anatomy as a patient slips away, presumably having ben admitted after a staring competition with Councillor Lonergan.

We're joking, of course. He seems a sound bloke.

Delighted! Thanks to @IrishCentral for this article http://t.co/eJXX5IVVJU The biggest and best Irish site in the US #voteformartinlonergan

Richard O'Donoghue's anthem was written and composed by Veronica Callinan her sister Helena Twomey to show their full support for Richard in the 2016 General Election.

Sung by their father Harry Twomey, the song was recorded on New Years Day 2016.

Sweet jesus the back arse of Ireland is still alive and well. The difference between the 'alright boy' culchie morons and Dublin is amazing.. Take this shite down yis big thickos!!

He seems like a bollocks. This is a tune.

There's no taking away from this outrageously catchy entry for Donegal's Tim Jackson, but the comments below it offer a particularly insightful snapshot into Irish politics as it currently stands: 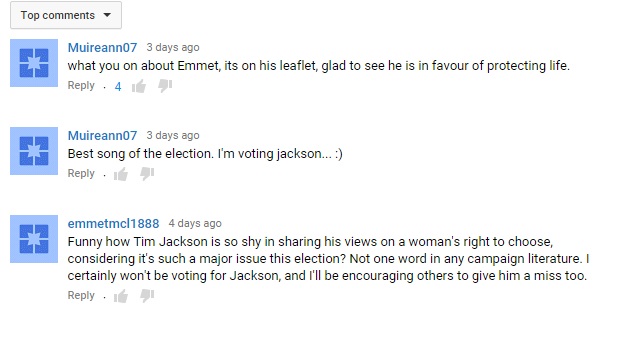 Whatever about the incredibly ill-advised location for a debate on such a delicate issue, Muireann07 really steals the show here. And It's difficult to disagree with her.

FM104's Strawberry Alarm Clock presenter Jim Nugent strips it back a notch with this emotionally evocative, thoughtful cover of Justin Bieber's Love Yourself.

With observatory lyrics like "And I been so busy at my job/You are just a knob/And there you go/Am I voting for you?/No", the comedic writer-slash-broadcaster really explores the intrinsic feelings of Ireland as a large towards politics, and lays them all out in a way that even the kids can understand.

If Nugent wrote this six weeks ago, he'd likely be going to the Eurovision.

The mack daddy of all election tunes, Haughey's melodic entry for the 1981 General Election was based on an original song about the Jacobite rebellion in Scotland in the 1740s. This basically means it influenced that infectious Eir ad from a few months ago.

In '81, Haughey came within a few hundred votes of holding complete power, losing just four seats. But the song was deemed so good another General Election was called almost immediately, and these four seats were later found in Haughey's living room.

This, of course, is entirely untrue, but the song is very much real. A hidden gem in Irish politics. The original election song.