The 11 Most Irish Stories From The Local Papers This Week

As you well know, local newspapers are an institution in Ireland. Along with tea, the likes of the Western People in Mayo and the Evening Echo in Cork form the very bedrock of Irish society. They also produce some of the most wonderfully Irish, occasionally uplifting but sometimes devastating stories you'll ever come across.

Each Thursday, we're going to bring you the best of the best - the most interesting, funny or insane stories from the local papers of that week. And believe me, this week is a doozy.

The best of the action this week was found in Dundalk, and the Dundalk Democrat had us well covered when the pesky Xerox Junction traffic lights failed for the second time since May. It was a bloody free-for-all at the interchange where motorists had to make their own ways across, with one onlooker describing the scenes as 'chaotic.' 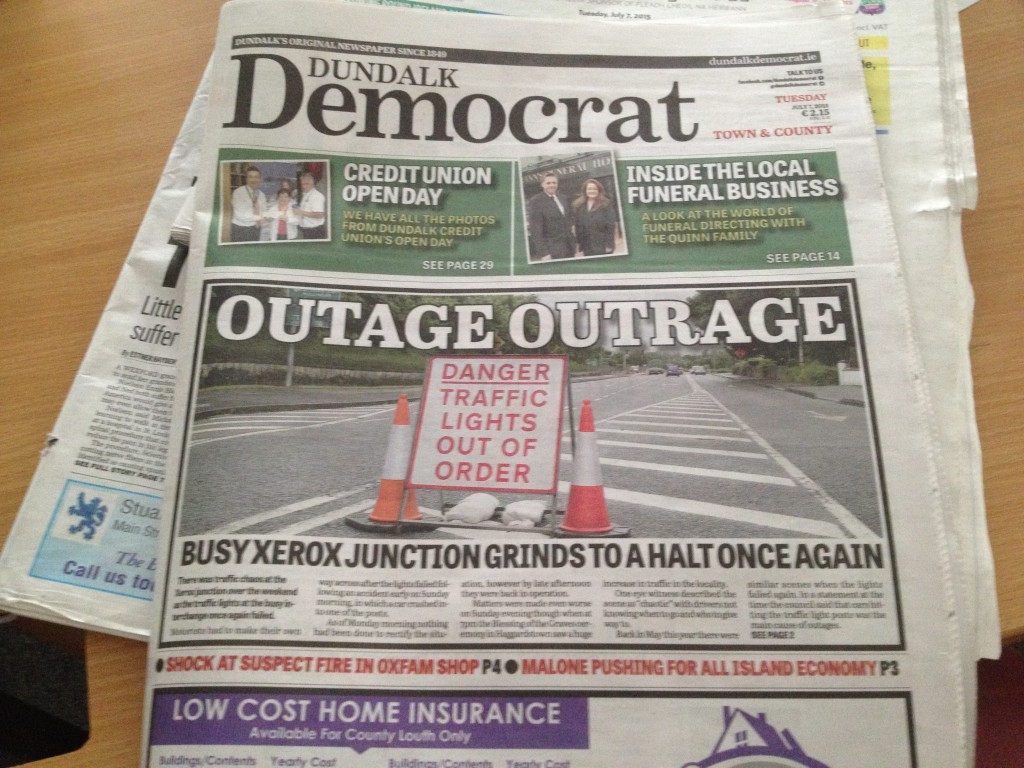 The Democrat also brought readers one of the year's most gruesome and chilling tales, and it wasn't Patrick being welcomed to the European parliament: 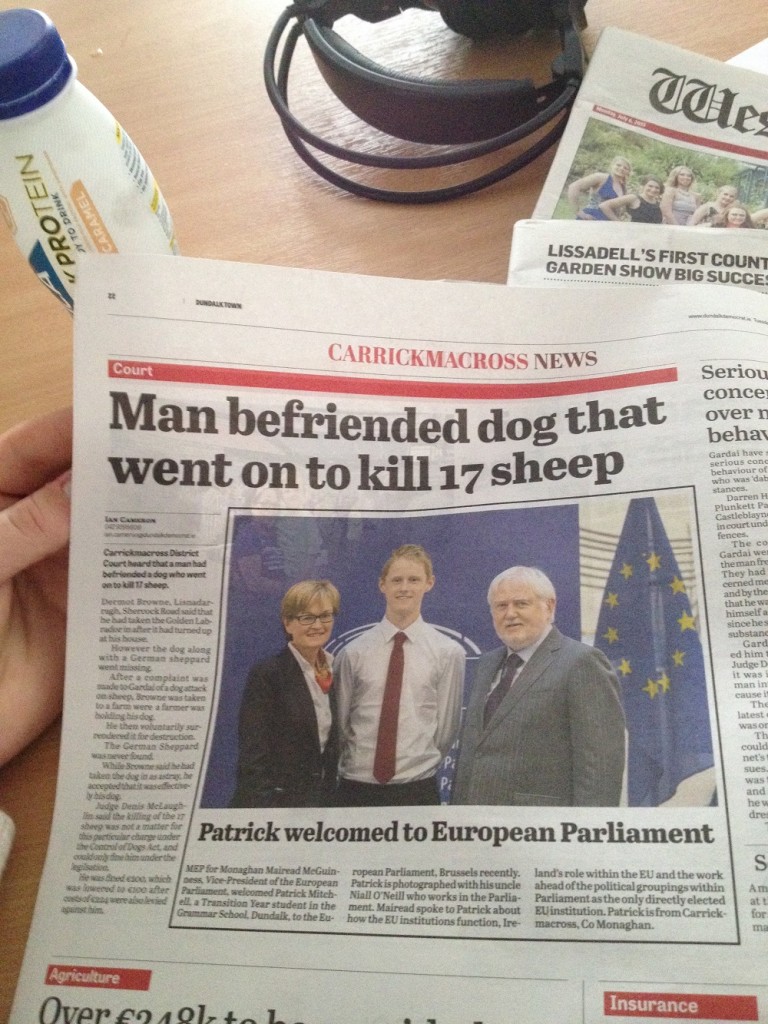 Dermot Browne of Lisnardagh had taken in a Golden Labrador, who went on to team up with a German Sheppard and do wreck to a herd of sheep. The labrador was destroyed, but the German Sheppard was never found.

Browne acknowledged in court that the labrador was effectively his dog, but judge Denis McLaughlin said the slaughter of 17 sheep was not a matter for any charge under the Control of Dogs Act. Browne was eventually fined €100 for his role in the massacre. But that was by no means the end of the violence and bloodshed in Louth last week.

It was also Deirdre's birthday. She celebrated the big 5-0 down in the local rugby club. 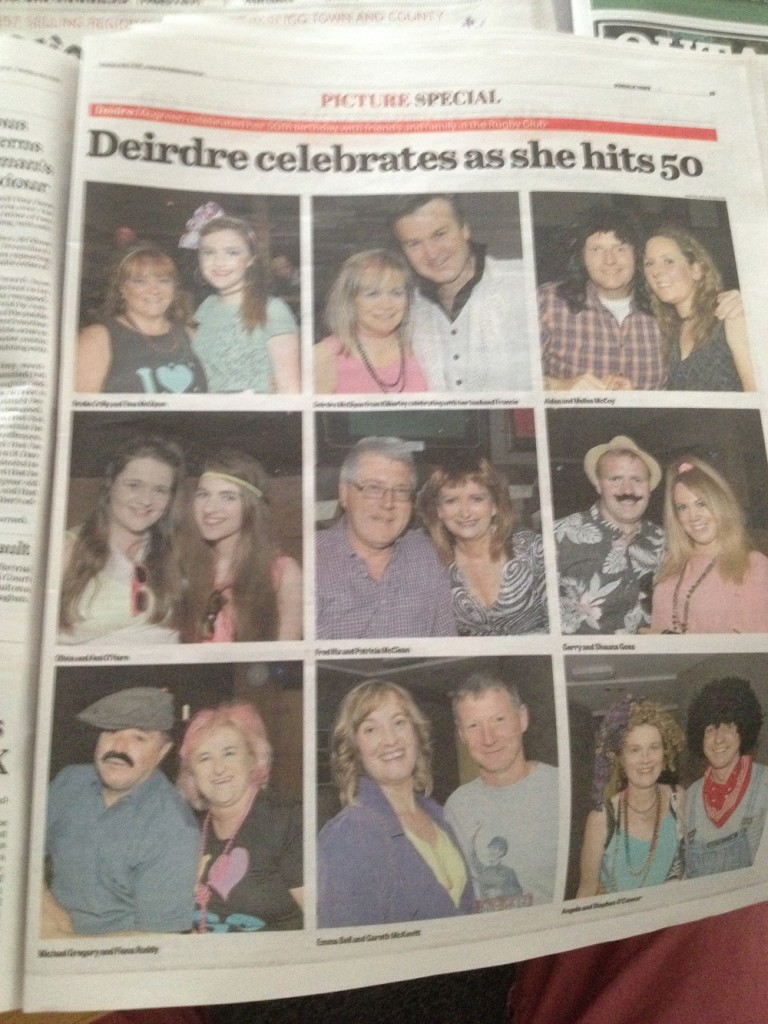 In an event totally unrelated to Deirdre's 50th, the violence and destruction continued... 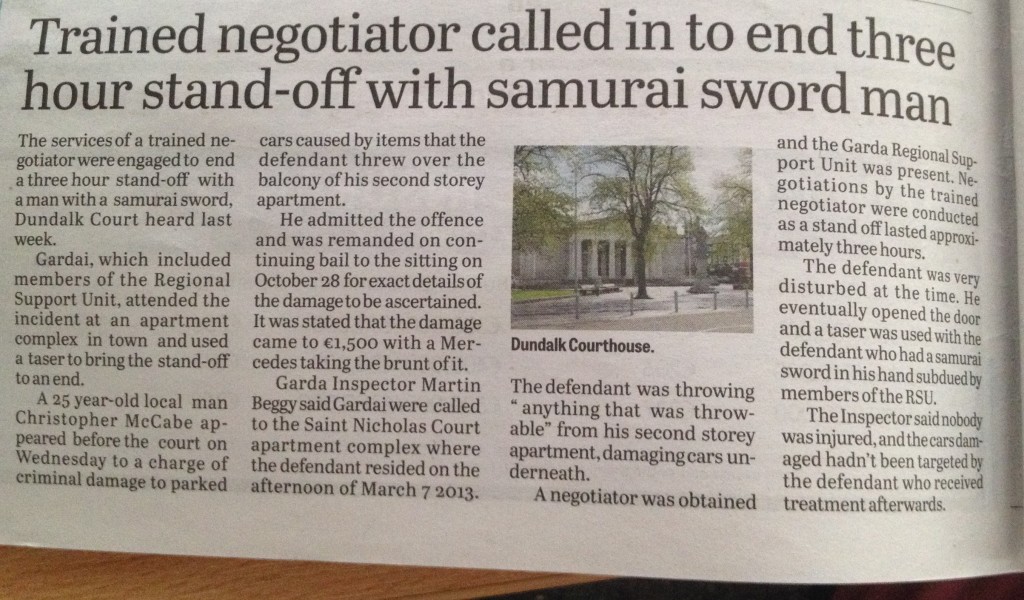 Deirdre, what went on at that party?

Up in Co. Sligo, The Champion brought us by far the most uplifting story of the week, with over 100 people taking to the icy seas of Dunmoran - stark bollocko no less - to raise money for Cancer Research. 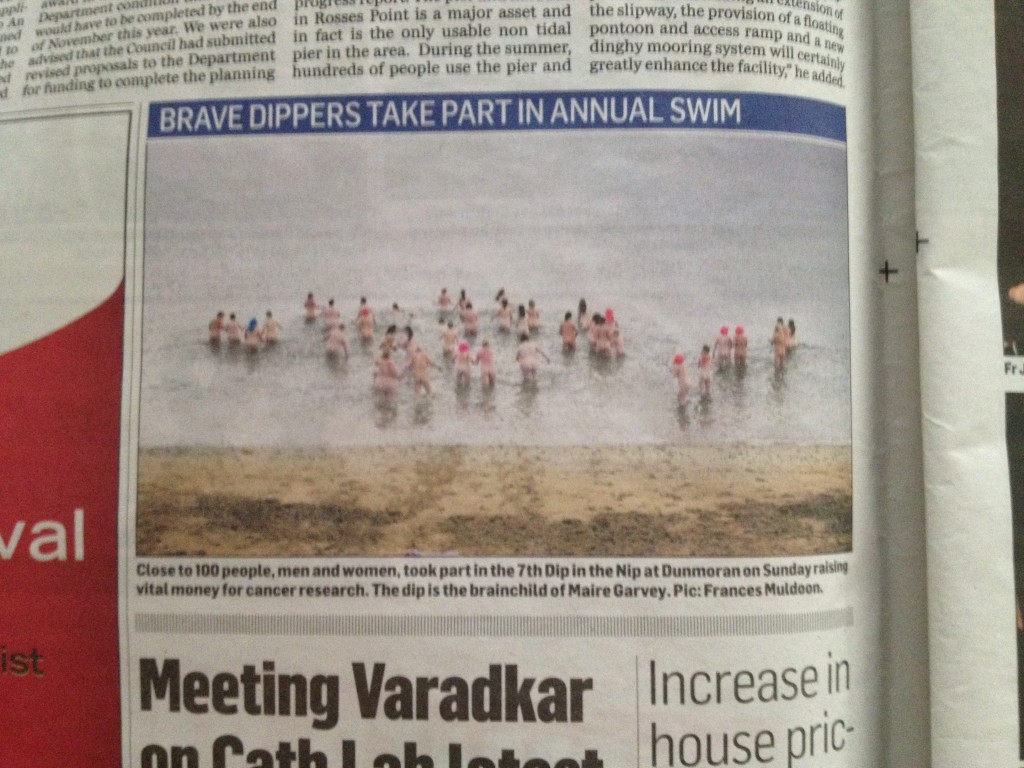 Fair play to Maire Garvey and all involved.

The Champion also updated us on the adventures of 'the worst superhero in the west.' 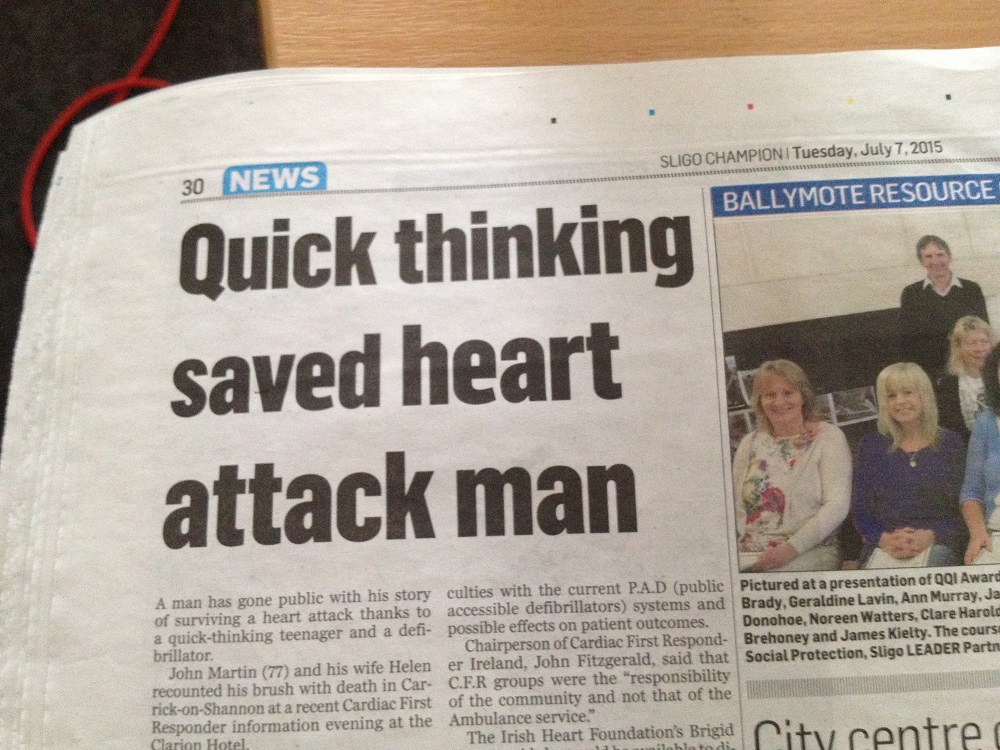 Jokes aside, this is the brilliant story of how a 17-year-old named Orla McNabola stumbled upon John Martin (77) having a heart-attack and applied CPR, while his wife jumped in the back of a random car and directed the driver to the nearest defibrillator.

John was speaking at a Cardiac First Responder meeting in Sligo's Clarion Hotel.

Across in Mayo, the Western People paid a visit to Vincent, who was reacquainted with his button accordion. 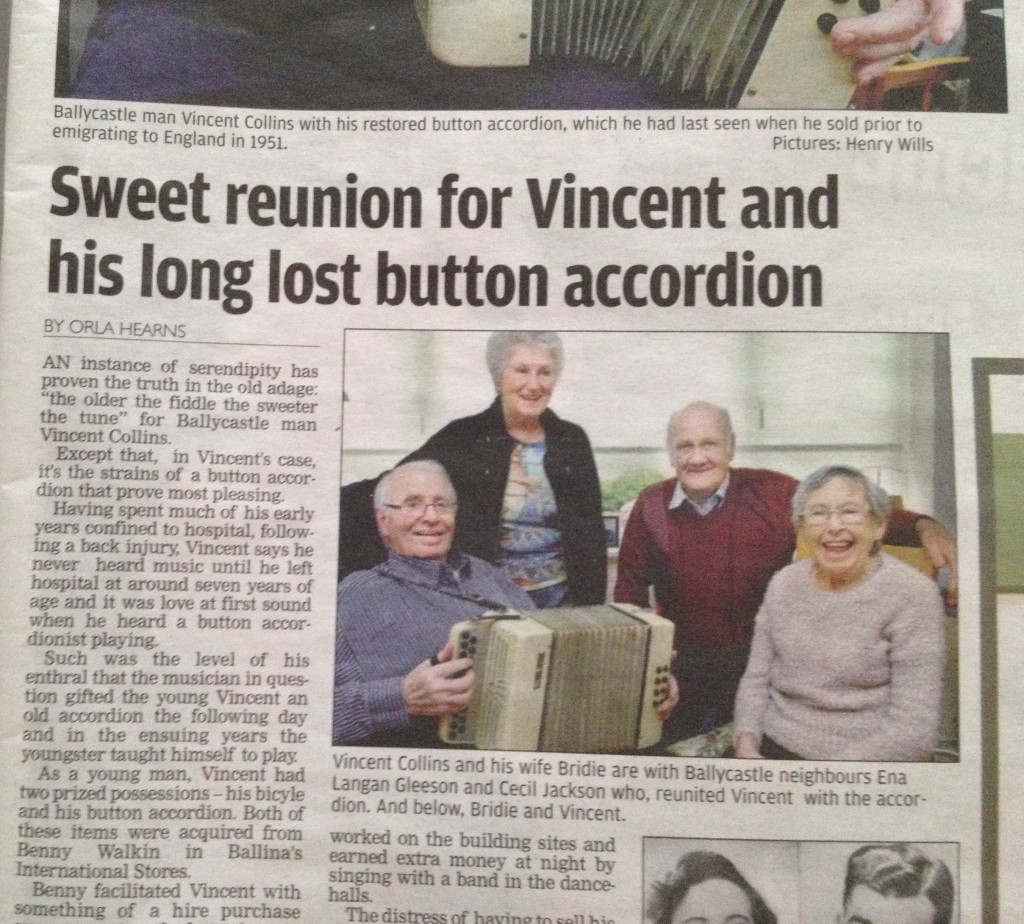 There was some shitty news for Countess Walderdorff in the Wexford People...

Some controversial news on the clerical front in the Strawberry County, with a serious roster shake-up announced by Bishop Brennan. 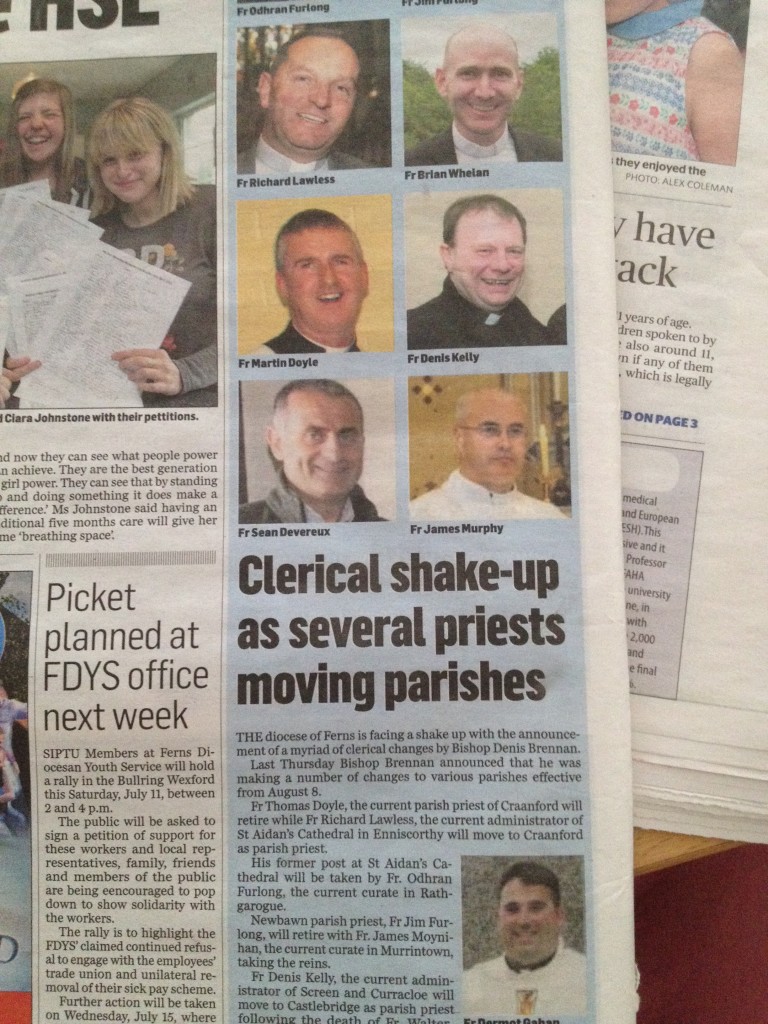 It seems Bishop Brennan is giving the local priests a kick up the arse, with the changes presumably brought upon by the retirement Craanford's Fr. Thomas Doyle.

And finally, the fairy epidemic continues to tear its way through Co. Cavan, so says the Anglo Celt. 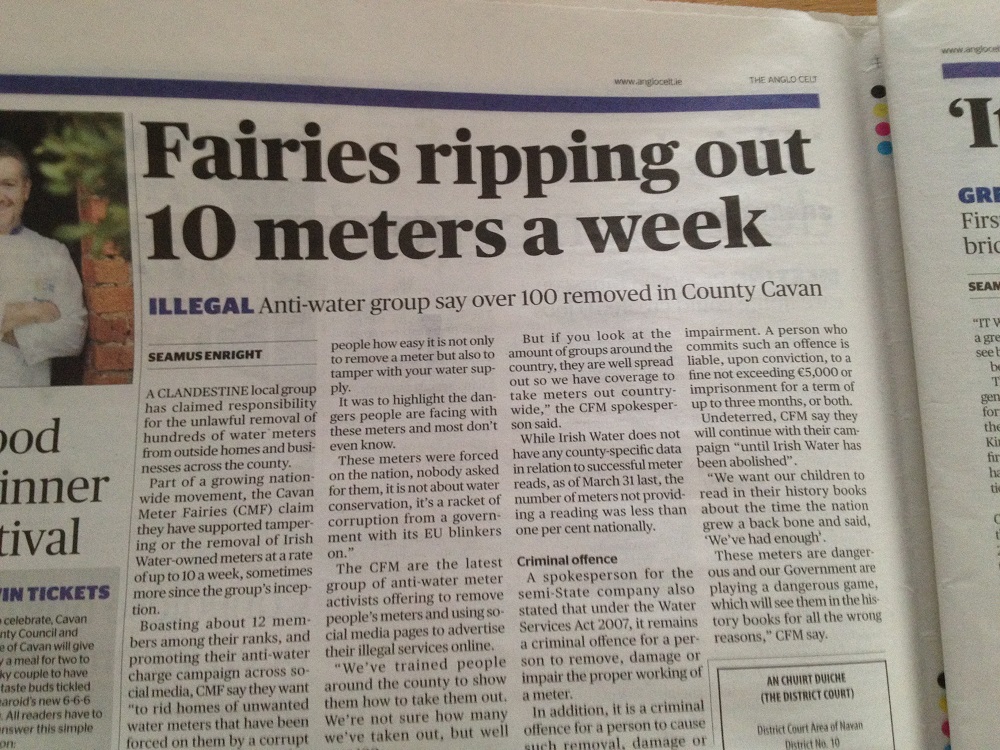 We'll have more from the local papers next week.

H/T: The Dundalk Democrat, The Sligo Champion, The Western People, The Anglo Celt and The Wexford People