Mrs. Doyle Urges Tired Motorists to "Go On And Take A Break"

There's no better woman than Craggy Island's parochial housekeeper, Mrs. Doyle to convince you to do something you don't want to do.

For years on Father Ted, she forced her cups of tea on anyone in sight, so it makes sense that she has been roped in to help Mayo County Council with their new road safety initiative being put in place over the bank holiday weekend to get urge tired drivers to take a break. 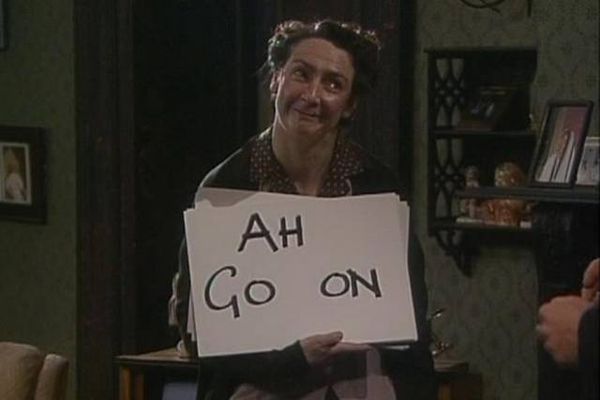 The council are attempting to combat driver fatigue and have erected a number of cardboard cut-outs of Pauline McLynn’s character to remind road users to take a break with the actress herself backing the “Go On, Go On, Take A Break” campaign.

The campaign follows on from the Road Safety Authority (RSA) launching their new ad campaign "Stop, Sip, Sleep" this week with research by the RSA showing that

1 in 5 collisions can be due to driver fatigue

With the August bank holiday being one of the busiest weekends on Irish roads the council are erecting the Mrs. Doyle signs to urge drivers to take a break when they begin to notice signs of driver fatigue such as feeling drowsy or varying their speed and driving too close to the car in front of them.

The key message is to take a 15 minute break. Actually drinking tea itself won't do anything to help fight driver fatigue.

Let's hope Mrs. Doyle gets her message across and everyone stays safe on the roads.

You can listen to the full interview here: