It's very well known that we in The Sliced Pan offices and indeed the whole of Ireland are very passionate about our tea and if there is one thing you don't mess with, apparently, it's an elderly couple and their love of strong tea.

A disgruntled Irish woman, Marie Ni Bhroin, was less than impressed with the way her elderly parents were treated in a Marks and Spencer store in Blanchardstown, Dublin in relation to the store's strict tea policy, and she took to the Marks and Spencer UK Facebook page to air her grievances and rather surprisingly, her post has gone viral with over 9,000 likes and more than 1,000 shares. 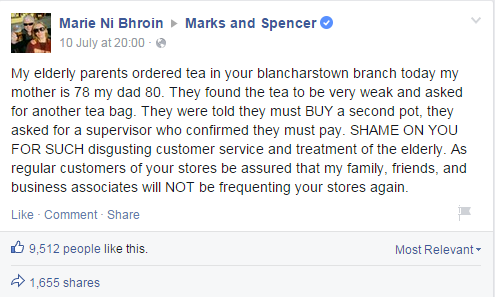 Most people were appalled with the tea travesty, echoing Marie's concerns for the elderly members of the locality:

While some saw it as a general disgrace regardless of age:

Others thought the whole thing was slightly ridiculous:

And others came to the defence of the store:

Marks and Spencer did reply twice to try and calm the situation and reached out to Marie:

But it doesn't seem to be bringing much peace with more people also expressing issues they have encountered in the store: 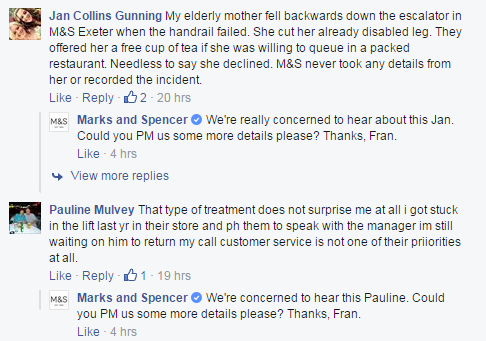 To see more comments on the topic you can view the thread here, and if there is one thing to take away from this whole scenario it's not to mess with an Irish person and their tea!