A man who claimed that Skellig Michael was "only alright" in Star Wars: The Force Awakens has reportedly been lynched in Portmagee, Co. Kerry.

Finbarr Whelan, a 29-year-old accountant from Tuam, Co. Galway, tweeted his criticism of the iconic island's performance during the final scene of the record-breaking franchise instalment.

According to friends, Whelan had attended the 14:10 screening of The Force Awakens at The EYE Cinema but refused to watch it in 3D, describing it as "a gimmick that they tried and failed with in the '90s." 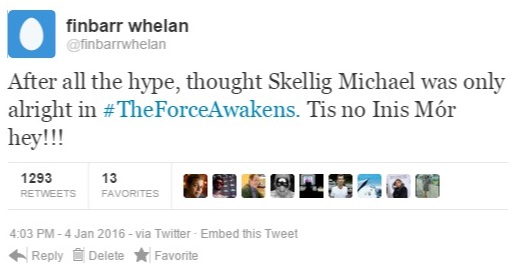 His girlfriend called the gardaí at approximately 23:00 the same night when Whelan failed to return home, but attempted to cancel the alert when she was made aware of his tweet.

She issued the following statement to Whelan, her partner of seven years:

Finnbarr, if you are out there, just know this: I do not want you to come home. How anybody could say anything remotely negative or untoward about Skellig Michael in this day and age is frankly beyond me.

When I realised you were missing I was terrified. But when I saw your tweet? I was glad. I knew you were no longer the person I met that night in Supermacs back in 2009. I knew you had changed beyond repair - that you were now capable of dark, evil behaviour.

She paused to fight tears before concluding:

Skellig Michael is stunning in the new Star Wars film, Finnbarr. Stunning, like. You should have seen it in 3D. Ah, it was magnificent altogether.

Authorities have now called off the search for the missing Galway man after reports surfaced in Portmagee that Whelan had been kidnapped and slowly executed by what a spokesperson described as 'frenzied, furious fans of the island'.

There was so much blood - so many people just smacking him with toy light sabres. I'm pretty sure one of them was a priest?

An Taoiseach Enda Kenny denounced the act as "inexcusable evil" that "cannot and will not be tolerated," before adding that Whelan's tweet made him "sick to [his] stomach."

It is believed that Whelan's estranged family have requested to travel to Skellig Michael in order to apologise for their family member's disturbing actions. 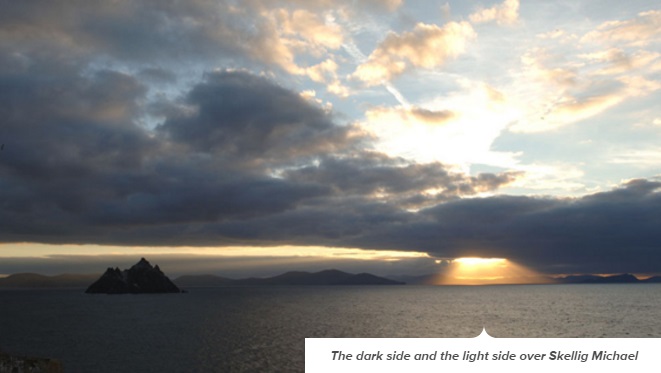 Ironically, Skellig Michael is a major influence on the fictional location 'Skellige' in the award-winning video game, The Witcher 3: Wild Hunt.