'Jack Mulligan' Film Cast Might Be The Greatest Sporting Ensemble Ever

The great film ensemble casts of our time - Ocean's Eleven, The Hangover, 2011 classic New Year's Eve - are all a who's who of famous faces and 'wow factor' cameo roles. But they're set to be challenged by an upcoming London-Irish short crime drama.

Presenting 'Jack Mulligan' - a GoFundMe project started by screenwriter and musician Andy Nolan - which is set for release in 2016, and will feature a cast jam-packed with bruising sporting stars.

Mayor of London Boris Johnson has also allegedly agreed to star as himself in a cameo role.

Add to that the latest signing, French rugby maestro Serge Betsen, and you've got yourself a potential half hour-long bloodbath set on the streets of London. 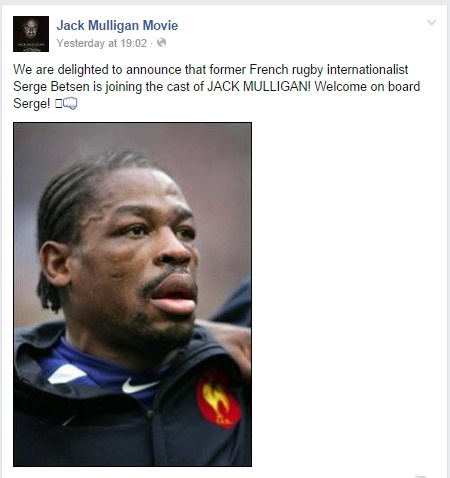 The film has been heavily promoted by former middleweight and super-middleweight world champion Collins on social media, and he confirmed Betsen's involvement on Facebook yesterday. No stranger to the big screen - 'The Celtic Warrior' once starred in Lock, Stock and Two Smoking Barrels as well as 2013's The Taxman - Collins' character will be head of fictional Irish gang 'the Green Bloods.'

Though listed as a fellow Green Bloods member, speaking to Balls, three-time World middleweight title challenger and former European champ Matthew Macklin distanced himself from a starring role in the crime flick:

I don't know anything about Jack Mulligan except they're making a film and Steve Collins is in it!

I told Andy Nolan [Bible Code Sundays songwriter, Jack Mulligan screenwriter] that I was up for it, but he'd have to ask me again. I never have the time.

When we asked him whether he'd consider following Liverpudlian cruiserweight Tony Bellew - who will star in Rocky spin-off Creed - onto the silver screen as opposed to the squared circle, Mack the Knife didn't rule anything out:

Yeah, I'd be up for it. Maybe after the boxing. Who knows?

But before we see Macklin tear up Hollywood, we still want to see him in an all-Munster World title bout.

It's looking like [I'll be back at] the end of September.

Hopefully after that me and Andy can get it on, so long as we both win our next fights.

Tipp versus Limerick for a world title? Now that'd be a serious drama.

You can get behind the Jack Mulligan project on its official GoFundMe page. You know you want to see it!