Two of the world's most powerful wizards will tie the knot this Sunday, directly across the street from the Westboro Baptist Church.

The staged wedding will be performed by two local actors in front of the Equality House in Topeka, Kansas, and was inspired by J.K. Rowling's tweets following Ireland's historic vote to legalise same-sex marriage last month.

Aaron Jackson, the founder of Planting Peace — the company that sponsors the Equality House — told the Huffington Post:

We are delighted to be hosting the Dumbledore and Gandalf wedding and stand with them in the face of bigotry and celebrate equality for all.

The WBC won’t have to go too far to picket this union. They can look out their front window.

Naturally, Jackson's demented, idiot neighbours were quick to chime in on the matter, but were promptly swatted away by Rowling herself.

.@WBCsigns Alas, the sheer awesomeness of such a union in such a place would blow your tiny bigoted minds out of your thick sloping skulls.

Prepare for the most immense "You shall not pass!" in history. 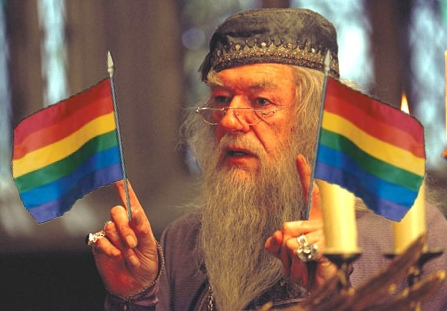