An Irish Brewery Has Created A 1916-Inspired Beer, So Of Fucking Course There Was War On Liveline

Wicklow Wolf Brewing Company have released a craft beer which draws inspiration from the Easter Rising of 1916.

The beer is named 'Children of the Revolution', so, naturally, a few absolute balloon knots were up in arms (heh) as if - by some freakish occurence - a group of children might read the word 'children' on the bottle and inexplicably become overwhelmed by the urge to pick up a sixpack of the bad-boys, evade their local Centra's strict IDing process and waddle out the door in an oversized trenchcoat.

Here are the brews in question, which will set you back €3.95 a pop. 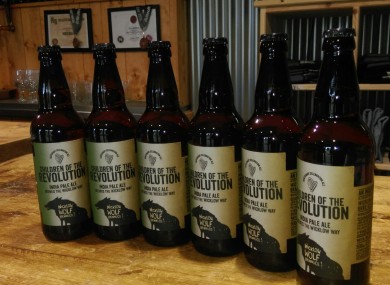 Naturally, too, the first port of call for these sad complainants was Joe Duffy on RTÉ's Liveline.

Experts agree that people who ring into radio talk-shows to 'have their say' are some of the most nightmarish arseholes known to man. This afternoon, this hypothesis was largely proven true, with a ravenous pack of bickerers essentially taking time out of their respective days in order to rant about other people making money.

Bear in mind we already have a beer called Bishop's Finger.

We wanted to mark, in our own way, the bravery and vision of our countrymen and women who made possible the Ireland we live in today,” explained Simon Lynch, who co-founded Wicklow Wolf alongside Quincey Fennelly.

“It’s got ingredients from both sides of the conflict,”

However, interestingly, the reaction on Twitter to these phsychos was almost universally one of ridicule. Who would have thought that Twitter, of all places, could offer a modicum of sanity?

'The word children should never appear on an alcohol bottle' What's your opinion on Children of the Revolution beer? https://t.co/rvi1dculln

Everything @WWolfBrewery make is usually top notch :-) This is such a load of nonsense... #liveline https://t.co/lJIXfifBUt

Thank god this is highlighted because I was about to give a bottle of this to the child. He'll have to have a Budweiser as usual. #liveline

I'm old enough to remember the queues of riotous toddlers outside off-licences the day Babycham was launched.#liveline

Don't drink + have zero interest in craft beer, but I hope @WWolfBrewery sales go through the roof after this wrong-headed madness #liveline

Ah yes they must be auditioning for a new series of Father Ted ...again #liveline

It's all very well worrying about the children but won't somebody think of the wolves ?! #liveline

Children Of The Revolution