1. Obsession with the weather

It's our favourite conversation starter. It has the ability to put even the most uptight individual at ease with one mention of "sure look at the weather we're having". And one thing you are guaranteed to discover is that we are never happy with the weather we are experiencing. If it's a beautiful sunny day, someone will complain "it's too bloody hot" and if it's raining, which it usually is, we give out about that too. We're difficult to please.

This follows on from our weather obsession and lack of satisfaction with the meteorological situation on a daily basis. We love to complain, about anything. The weather, the roads, the public transport system, the lack of funds for socialising - nothing is safe, but then again, are we really any worse than any other nation? Doubtful.

We here at The Sliced Pan don't hide the fact that we love our tea, in fact, more conversations about tea have taken place in the office in the last few days than would be heard in Bewleys all year. It's one of the best commodities known to man and it has a place at every occasion in the Irish social calendar. The Irish drink tea on a daily basis, it's what gets us out of bed in the morning. It also has magical curing powers and is frequently used as a remedy for shock. If you are Irish and don't drink tea, it's probably best to keep that odd fact to yourself.

4. We drink too much

Since us Irish have become synonymous with a culture of heavy drinkers it appears we have lived up to the name and taken it upon ourselves to honour the title bestowed upon us. You think that the older you get, the more you can handle your drink and know your limits. This isn't usually the case. Getting older just means more money to spend on fancier drinks which then leads to a two-day hangover. Will we ever learn?

The Irish are known globally as joyous potato-lovers, and we aren't even ashamed to admit this is entirely accurate. Our love for the ball of fluffy white goodness is unfaltering and those rare breeds who aren't the biggest fan of potatoes have the utmost respect for them and wouldn't dare bad mouth them. Such a versatile ingredient there is no end to their talent for adding the much needed carbs to any meal.

The Irish Mammy is a widespread spectacle with a unique personality trait of being over-protective, usually most commonly in relation to the sons of an Irish family. Known for her sensational one liners she will drive you mad, while simultaneously providing constant entertainment. But her constant nagging comes from a place of love and should be embraced and appreciated. She is liable to utter phrases such as:

Eat that up now! Think of all the poor starving children in the world who haven’t a bite and you with a big plate in front of you!

When I was your age we played with twigs, and leaves. Have you no imagination? There's no need for those fancy toys, we got fruit in our Christmas stocking. And we were glad of it too.

Would you ever get off that machine and do something to help clean this place, the visitors will be here soon.

Get up off that cold ground! You’ll get a kidney infection!

As a nation we are big fans of "having the chats" so there is no surprise we are known for havin gthe gift of the gab. If a story can be told in a concise paragraph length conversation, we will tell it in essay format. Also we tend to speak extremely fast, probably so we can maximise our word usage, but also confusing most non natives. We also tend to include unnecessary extra bits of information, just to fluff out the story so if an Irish person is telling a story, take a seat, you'll be there long enough to require comfort.

8. We can't take a compliment

"I love your dress", "You look beautiful", "You're so good at drawing". WHAT? no, take it back! Compliments make Irish people feel extremely uncomfortable, confused and suspicious about the person providing the undeserved attention. Why are you being nice to me? Is this to make me question myself? A compliment to an Irish person is always reciprocated with self-ridicule like " Oh, got this dress in Penneys, and my arse looks awful in it" or "No, I don't, the state of me, I look like I was dragged through a bush backwards". This basically translates as thank you.

One of the better stereotypes associated with us is that we are a happy, friendly and welcoming bunch of people, up for having the craic. In fairness, this is pretty accurate. Have you ever seen a boring, grumpy Irish person on an American TV show? No. Would American TV lie to us? No. There you go, stereotype confirmed. 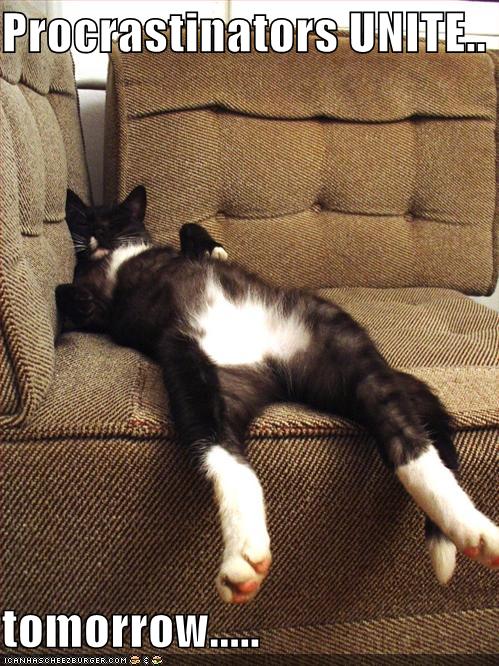 Irish people are the champions of procrastination. The phrase "Oh I'll do that tomorrow" is said in most Irish households multiple times a day. In reality, this thing that probably needed to be done yesterday will be put on the back burner for another few weeks until it can't be put off any longer and panic will set in.

Sorry to get all morbid but the Irish have a strange obsession with death the older they get. It's not the Grim Reaper knocking on their door that has them fascinated, it's the death of others around them. It's not unusual for an older Irish person to be rabbiting on about someone they knew years ago and then all of a sudden say "are they dead actually I wonder?" or "have they died yet?". Don't be offended if you hear something along those lines being said in a nonchalant manner, it's just an Irish thing.