The Luas is an awful handy way of getting around the big shmoke and is fool proof when it comes to figuring it out, well, for most. All they need now is connect the red and green line and all will be right with the country (not really obviously but it would be a great idea).

Regardless of whether it's the red or the green line you find yourself on, there are certain travellers that you just can't escape. Here are the 9 types of people on the Luas that you have to deal with on a daily basis.

We were all one of them once but we still look at them with a look that's a mix between pity and pure glee when they haven't a clue what direction they are going in not to mention how to master the ticket machine. Good luck you poor creature.

Ya I'm being sarcastic. This is the eejit that got away with not buying a ticket ONCE in their life and has tried for a second time but sticks out like a sore thumb. It's usually a lone ranger or a group of lads who are new to the whole being away in a city for college thing and pace the carriages all excited at the prospect of saving the €3. That is until they meet their maker in the form of the ticket inspector and now have to pay €45 instead. Unlucky pal.

There's nothing wrong with a little friendly conversation between passengers but the whole tram doesn't actually need or care to know your whole conversation.

There are variations of this:

The educator - who takes it upon themselves to give an Irish history lesson to the poor unfortunate French couple who just asked what stop they needed to get off at for Diceys.

The girlfriends - they were at yoga together last night but this morning they talk at a rate of knots as if they need a year long catch up. Delighted for you that you have so much to talk about but could you not tell us all about your date with Ben who was average looking but paid for everything.

The asshole - no you're not better than anyone else just because you're on the phone to your mate who is going to pick you up in the Range later so you can head to Dundrum to pick up a few bits for your third holiday this summer to Marbella. Get lost.

Don't worry I'm not going to start slating tourists. I understand how difficult it can be to try and figure out a public transport system in a foreign country, but what is irritating is huge groups who push past you and take up the whole carriage nattering in Spanish at the top of their voices. Is it necessary to travel in intimidating packs all the time and then have no consideration for fellow passengers who are getting elbowed in the face due to over enthusiastic hand gestures? A little awareness would go a long way.

The pain in the arse 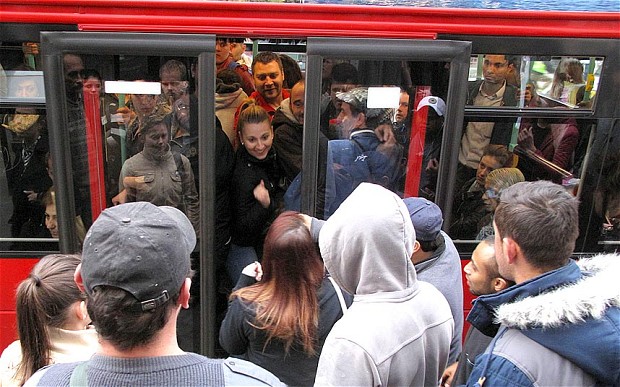 It's 8.40 in the morning and you are wedged on the Luas heading in to work and are just waiting for the next stop so one person gets off and you have a chance to breathe. Then just as you think you've gained some air space and your claustrophobia has started to subside, some eejit comes along and in a blind panic that they will be late for work squeezes in the door only to stand ON you and flick their hair in your mouth. Sound.

Rush hour on the Luas involves a lot of people standing and not a whole lot of support so inevitably maintaining your balance every time the tram comes to a halt or starts off again is a mighty challenge. one poor unfortunate wont have time to grab the nearest pole and will either go flying into the door or the back of the nearest person, beginning a domino effect.

You're minding your own business just texting your pal about meeting for a drink and a catch up later and next thing you sense this presence looking over your shoulder glaring at your message. When you look at them suspiciously they casually avert their gaze while rubbing their eye as if they weren't just nosing in on your business.

The Luas goes eerily silent when these type of individuals set foot on the tram. Usually loud, drunk and shouting some form of obscenities the best thing to do is avoid eye contact at all costs. Their uniform attire is more often than not a tracksuit and runners of some sort although not exclusively.

The Luas is packed and everyone is standing with their hands held close to their body in some way, shape or form and the next thing you know the person beside you thinks they have the carriage to themselves and whips out a newspaper which is, of course, thrust in your face as they manoeuvre around the broadsheet. Have a bit of consideration please.